Imagine this: you have no phone, computers have not been invented and the postal service does not exist; how do you stay in contact with your friends? Now imagine you’re underwater. Hopefully, you left your phone behind, there is no signal anyway; your paper has gone soggy and visibility is only a couple of metres. How long will you be able to remain in contact with your friend(s)? Some divers manage to keep in touch for an entire dive, but it is a skill that lots of us are still developing. Under these conditions, it is easy to imagine maintaining a long-term friendship could expend a lot more energy than the value or benefit derived from that friendship. Perhaps, under these conditions, a more solitary nomadic life would be preferable, and being an individual traveller or lone wanderer would be the best option in life.

When we first encountered undulate rays along Dorset’s coast, it was easy to assume that somewhere along their 100 million years of evolution, the rays had made the decision to be predominantly solitary and it had worked for them; at least until we developed our commercial fishing prowess to an indiscriminately high level. After all, they have existed on this planet a lot longer than human beings so maybe their natural social distancing had given them the edge. We never see them in large compact groups; most often we see individuals and occasionally come across two or three close together, and even then, they generally have a reasonable social distance between them. Over the last few years, we have been fortunate enough to come face to face with hundreds of undulate rays, and our belief that they are solitary individuals has recently been challenged.
Many of you will know of our fascination with the undulate ray. We first presented the ability to recognise individuals from the pattern on their dorsal side at the Porcupine Marine Natural History Society conference in 2015 (Porcupine Bulletin 4: 2015) and we presented some of the early results in 2017 (Porcupine Bulletin 8: 2017). Having a non-marine, non-biological background, the discussions at conference gatherings have been invaluable, as each year we gathered more data on undulate rays. The benefit of attending these social gatherings has certainly exceeded the effort and energy expended on our part, because the project benefits from the combined knowledge base it is able to draw upon. But still, until recently we believed undulates saw no benefit in being social and lived their lives predominantly as individuals.

Intruding into the world of undulate rays has been amazing. The excitement when we realised that a single photograph provided enough information to identify an individual fish; amazement when the first photographs matched and we knew that particular fish had been seen before; astonishment that an individual fish would show up in the same place where they had been 2 or 3 years previously. How did they find their way back?

The Undulate Ray Project (www.undulateray.uk) is now custodian of the world’s largest collection of undulate ray photographs; there is photographic ID for about 900 individuals; nearly 300 individual undulates have visited the site that the project monitors in Dorset and about 100 of those individuals have been seen on more than one day. Without realising it and without the aid of an invasive tag, this has become one of the longest running capture-mark-recapture programs for a batoid species. ‘Mr Grace’, our most seen ray has been photographed on 8 separate days, always at the same location. It is rare but not unknown for the project to record a ray that has travelled any significant distance. 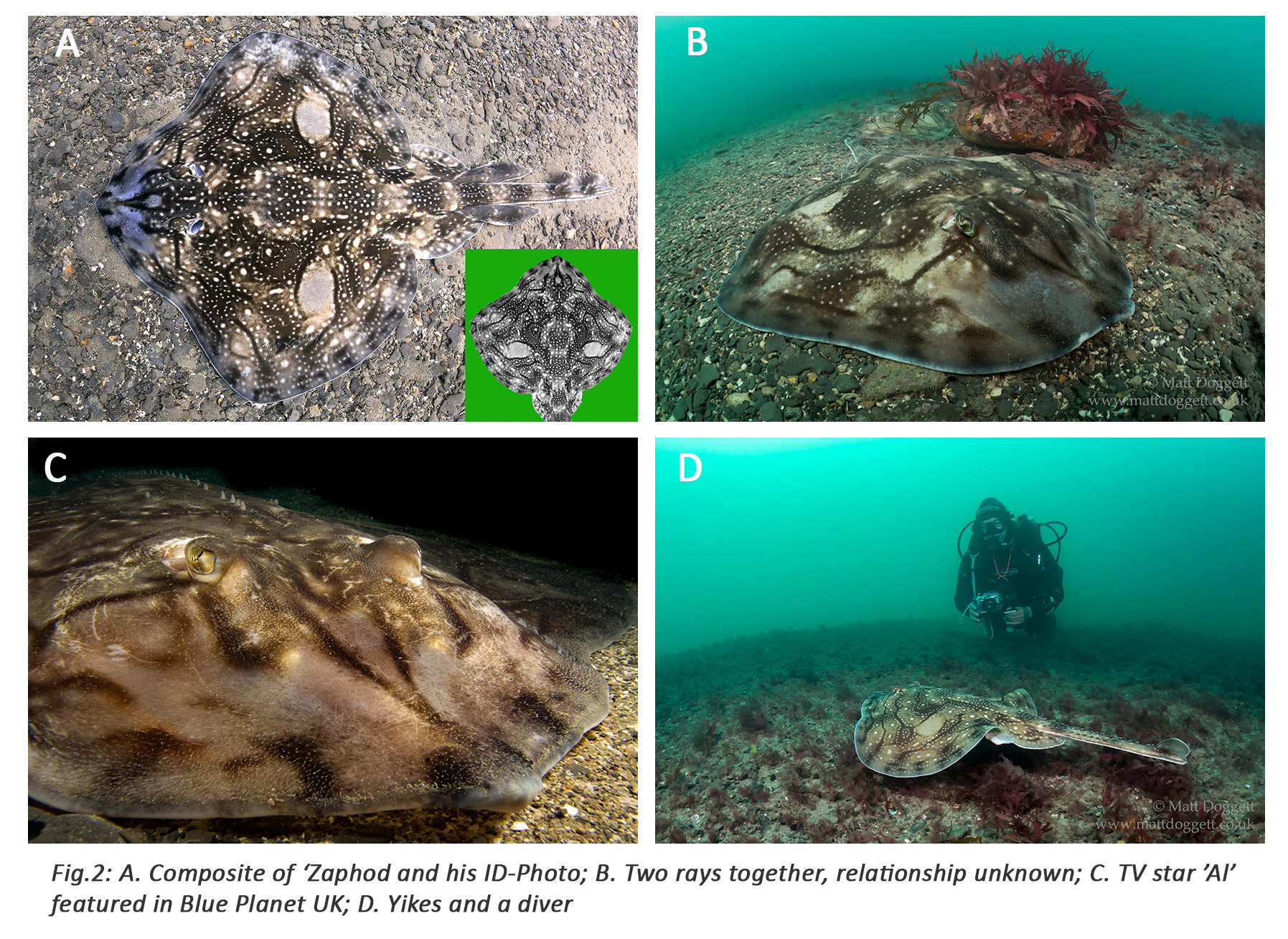 We are still astonished when a ray, not seen for several years, returns to the site as this year (2020) with ‘Xerrys’, first seen and recorded in August 2013 and not seen again until 2017. He turned up again in August 2020, giving him the accolade of the longest period between first and last sighting, just a few days short of 7 years. He was clearly a male ray when first seen and estimated to be about 14 or 15 years old when last seen in August 2020. We have no idea where he may have been in the interim but with 500 ray sightings on the site in the intervening time, if he had remained on the site, he has been hiding.

We had assumed that ‘Xerrys’, like other rays, was a lone traveller, perhaps roaming far, perhaps moving around in local waters but occasionally coming back to places he has been before. We had never questioned the assumption that he, or any other ray, lives their life as single independent individuals. Why would ‘Xerrys’ need to make the effort to remain in contact with other rays? He does not need to return to a specific place to rest. Rays exhibit no parental care; they lay their eggs and leave. When the eggs hatch, tiny but fully formed rays emerge and must immediately fend for themselves. They obviously meet other rays during their travels - where else would the baby rays come from? - but they have no need to form shoals for protection and if ‘Xerrys’ wanted friends how would he keep in touch with them?

On that same day in August 2020, we met four other undulate rays, including one old friend ‘Blu’, another male who was already in the database. The remaining three rays were, in project terms, new arrivals not previously recorded before, a typical ratio for this site. ‘Blu’ had only been seen once before, but that was three years earlier, in August 2017 – on exactly the same day that ‘Xerrys’ was last seen! It raises some questions; is it just coincidence or are ‘Xerrys’ and ‘Blu’ old friends? Have they made the effort to remain together, and if so, why?

It is equally easy to dismiss it as an amazing coincidence, “they just happened to be there on the same day”, but ‘Xerrys’ and ‘Blu’ are not the first pair of rays to show up on exactly the same days. It has happened several times and certainly enough to get my attention. We can estimate the population size from the repeat sighting data, and if the rays are lone individuals, the possibility of ‘Xerrys’ and ‘Blu’ being seen on the same day on 2 separate occassions is about 1 in 800. It could easily happen, but it would not happen too often. On one occasion in June 2017, we had four rays seen on one day, and the same four were all seen again on a single day a year later in 2018. The odds that this would happen, without a driving factor is about 1:700,000 - lottery territory! ‘Dierdray’, ‘Yveray’ and ‘Torvill’ are another three, seen on the same day in August 2013, not seen at all in 2014 or 2015, but were all seen again, on the same day in July 2016. In addition to the foursome and the two threesomes, ‘Xerrys’ and ‘Blu’ are now the sixth pair of rays to be seen on the same two days more than three-months apart, but not seen on the site on a regular basis. When two rays are seen together, the first thing that comes to mind is that they are ‘mates’, but as gender pairings vary and ‘Xerrys’ and ‘Blu’ are both male, this would be in a platonic sense. What is the basis of their association?

Manchester University ran some statistical network analysis and although the work has yet to be published, the outcome was clear. Statistically, comparing the co-occurrence of paired individuals against a modelled prediction, the observed co-occurrence is not random, indicating a high probability of same pair migration and social interaction. The methods are tricky to follow, and more people relate to lottery odds than trust statistics, but the outcome is the same, ‘Xerrys’ and ‘Blu’ are likely to have remained together or have the ability to re-locate each other and come back together. Regardless of how you do the statistics, my assumption that rays are lone individuals with no social interaction has suddenly fallen apart.

It was therefore great news to see the New Scientist title, “Grey reef sharks hang out with the same friends year after year” (New Scientist 3296), referring to a Royal Society paper on reef shark multiyear social stability (Papastamatiou et al. 2020). The paper reports grey reef sharks forming lasting associations between individuals and explores potential social benefits that may drive their behaviour. We have often seen a small juvenile near a large mature undulate ray, and have wondered whether a learning experience is in progress, but it would appear the associations go much further and could be much longer lasting than we imagine, if we can imagine it?

Rays certainly appear to have friends, but that leaves us with a new question to answer. No matter what drives them, or what benefits they derive from any social interaction, and given variable underwater conditions, how do the rays manage to stay in contact? We divers only go there when the water is calm and clear, or at least relatively calm and clear. To stay together in poor visibility, we attach to a fixed point, to each other, or use high-tech comms equipment, and with difficulty, we manage for a short period of time. ‘Xerrys’ and ‘Blu’ were recorded in the same area three years apart. How did they do that? What is further mystifying is that when rays like ‘Xerrys’ and ‘Blu’ are seen on the same day, they are rarely seen side by side and may be separated by 50m or more, but they are still in the vicinity of each other, even several years later.

Undulate rays, and skates in general, are found in the fossil record having been on this planet much longer than humans. Perhaps we should take social distancing lessons from them and maybe, with another 100 million years of evolution, humans will no longer need Facebook, Zoom or mobile phones. We are convinced the associations we see between rays are not random occurrences; they choose to form long-lasting associations. We do not know why or how they do it, but would love to know more. Perhaps others have seen unexplained behaviours between fish that may be a similar ‘friendship’ trait, or perhaps you remain unconvinced and can offer a different explanation for these observed associations.